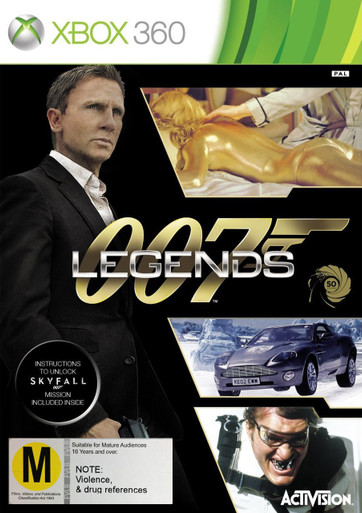 James Bond: 007 Legends is an Action-Adventure First-Person Shooter released for the fiftieth anniversary of the James Bond film franchise. The overall storyline of the game is woven together through mission play that is based on the plots of several Bond movies, including the 2012 release, "Skyfall." Additional features include: investigative, surveillance and stealth skills, dynamic freeform melee action, signature Bond weapon, gadget and vehicle play scenarios, Iconic villains, and diverse multiplayer options.

Our story begins deep in murky, watery depths. You're James Bond, and you're drifting, unconscious. You don't know why – only that you’re struggling for your life like never before. In moments of cognizance, you recall epic moments from the last 50 years. The harrowing chases. The uber-villains. The exotic locales. The girls. What will be your legend if this is the end?