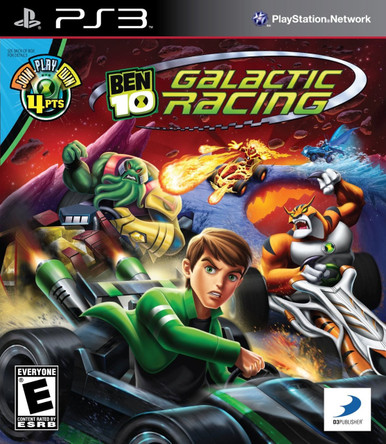 The first kart racing game set in the popular Ben 10 universe and based on the hit Cartoon Network TV series features Ben and his alien friends competing in an over-the-top, galactic grand prix race through a variety of tracks on five different planets! Compete for the best times in the high-speed grand prix modes or engage in four-player multiplayer mayhem!

Aliens, start your engines! Get ready for ultimate fun with Ben and his alien friends in this galactic grand prix. Twist and turn through challenging high-speed tracks as you make your way to the finish line. Be prepared for some surprises as Ben may unexpectedly transform into any alien!

In BEN 10 Galactic Racing, the first racing game based on the popular BEN 10 television series on Cartoon Network, fans will enjoy a BEN 10 multiplayer experience in a galactic grand prix filled with surprises at every turn. Play as either Ben, Kevin or choose from 13 fan-favorite aliens. BEN 10 Galactic Racing presents the ultimate racing experience, where every character has a special ability to utilize on the race track and even Ben can transform into different aliens mid-race!