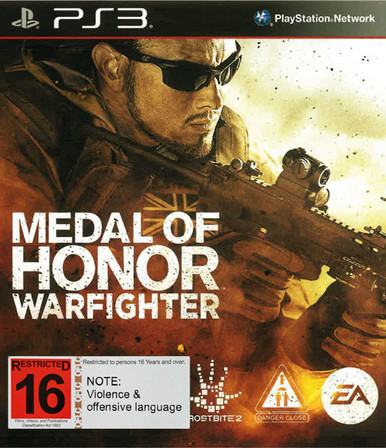 Medal of Honor: Warfighter is a First-Person Shooter featuring covert Tier 1 military operative combat. The game is a sequel to the 2010 release, Medal of Honor, which moved the long-running game series from its roots in WWII based gameplay, into modern warfare scenarios and true-to-life conflicts. The single-player campaign features mission play involving returning characters "Mother," "Preacher," "Voodoo" and others in operations after their service in Afghanistan. Multiplayer modes include 2-20 player support in which players have the ability to play as one of 13 real special ops units, from 10 countries.

Continue the Mission Around the World

Written by active US Tier 1 Operators while deployed overseas and inspired by real world threats, Medal of Honor: Warfighter delivers an aggressive, gritty, and authentic experience that puts gamers in the boots of today's most precise and disciplined warrior. The game is an up close and personal look at today's battlefield and the fight against the ongoing global terror threat.

In the single player campaign, Medal of Honor: Warfighter tells the story of US Tier 1 Operator, call sign "Preacher" as he returns home from overseas only to find his family torn apart from years of deployment. Trying to pick up the pieces to salvage what remains of his marriage, Preacher is reminded of what he’s fighting for - family. But when an extremely deadly explosive (PETN) penetrates civilian borders and his two worlds collide, Preacher and his fellow teammates are sent on missions to real world incursions to solve the problem. They take the fight to the enemy and do whatever it takes to protect their loved ones from harm.

Multiplayer - Who Will You Fight For?

The international hotspots, and Tier 1 operations of the Medal of Honor: Warfighter single player campaign is ratcheted up even further in the game's multiplayer experience. Here players from around the country and world, band together and play as members of one of several, real-life, elite Tier-1 fighting forces from around the globe, bringing a whole new meaning to all-inclusive nature of the Xbox LIVE service. The factions available and their corresponding nationalities include: