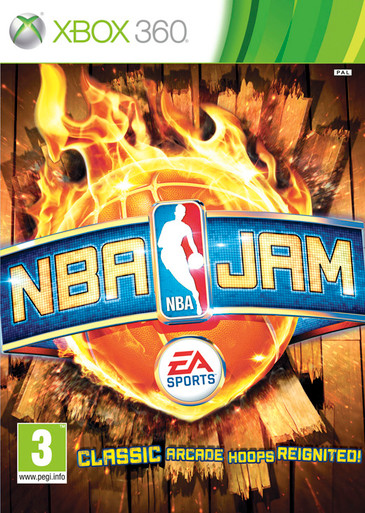 NBA JAM for Xbox 360 is an unique multiplayer arcade style basketball game that mixes the over-the-top fun of the original, old school, coin-operated two-on-two game, with modern gaming graphics. Designed with Next-Gen consoles in mind, the game preserves the distinct visual 2D style of the arcade classic which incorporates specific player and coaches likeness', but adds crisp court, crowd and scoring celebration details that are only possible in modern gaming consoles. Additional features include in-game unlockables, representation from every team in the league and boss battles against some of the best NBA players in history.

The Return of Classic Arcade Basketball

Featuring the sights and sounds that fans of the franchise will instantly recognize, EA Sports' NBA JAM mixes old school and new school round ball stylings to deliver a one-of-a-kind sports presentation on Xbox 360. In this all-new showcase for the game, shoves, spins and of course, backboard smashing dunks, take center stage in the classic two-on-two gameplay that is at the core of NBA JAM. In these battles, every team in the league is represented, with your favorite NBA marquee players from each ready to do your bidding in the paint, in transition and maybe, even on D. Designed first and foremost to be fun, the outlandish moves possible for all in-game players throughout the game feature pick-up-and-play controls, meaning that anybody can be slamming jams home and knocking down 3s in seconds. In addition, players can share the action and fun with friends everywhere, via the game's 4-player support both locally and online. Over-the-top NBA arcade action awaits, as well as few special boss battles on the hardwood that NBA fans must see to believe.

In addition to frenetic MVP action above the rim, NBA JAM brings a unique visual style to Xbox 360. Unmatched player likeness and reactions exaggerate the outrageous moves that make up the core JAM experience, elevating the already intense gameplay to new heights. Couple all this with a wealth of game modes, classic JAM gameplay, more than 100 cheat codes and loads of unlockables and you'll see why the revival of NBA JAM is a slam dunk on any gamer's home court.