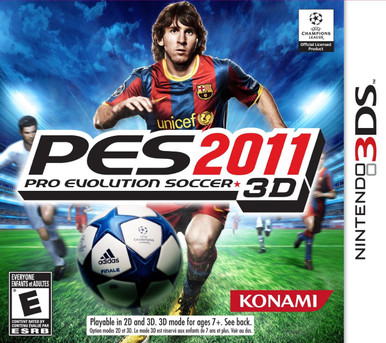 The Ultimate Soccer Franchise Comes to the 3DS

For over 15 years, soccer fans have looked to Konami to deliver the most authentic soccer experience short of stepping onto the field and playing the real thing. Now Konami brings fans the first soccer game in 3D - PES 2011 3D for Nintendo's new 3DS handheld gaming platform. Enjoy the game with hefty modes and competitions including the UEFA Champions League and prominent Master League.

Nintendo 3DS is a groundbreaking hardware release that brings 3D gaming to the handheld market for the first time. The fourth major release in the DS product line, the Nintendo 3DS utilizes 3D Slider functionality and an improved top LCD display to present a glasses-free 3D effect in compatible games, while giving players the option to moderate the effect as they see fit. Taken together with additional features including full analog control in 3D game environments, motion and gyro sensors that transfer the movements of the handheld into the game, 3D camera functionality, an adjustable stylus and full backwards compatibility and you have not only a must-have system, but a revolution in handheld gaming.