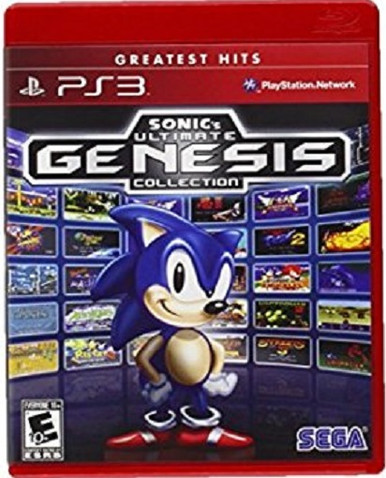 With over 40 titles from the SEGA Genesis era, including all the Sonic The Hedgehog favourites, fans will experience these classics now in sleek HD. With plenty of single-player and multiplayer action, gamers will take down a huge variety of enemies, including Sonic's nemesis Dr. Egg man, shuriken-flinging ninjas, hordes of altered beasts and the world's greatest fighting champions.

Each title within Sonic's Ultimate Genesis Collection has been converted to hi-def (720p), ensuring that classic SEGA Genesis 2D style gaming never looked so good, but this collection is about more than looks. Each game will also play just as well, with original control schemes precisely matched to the intuitive and familiar controls of the PlayStation 3 video gaming system. And since fun is always better when shared, multiplayer fans will enjoy the competition as they and their friends engage in 2-player classic battles in select games. Lastly all players with a PlayStation Network (PSN) account will appreciate that their side-scrolling skill translates to the online arena via the collection's set of PSN trophies.