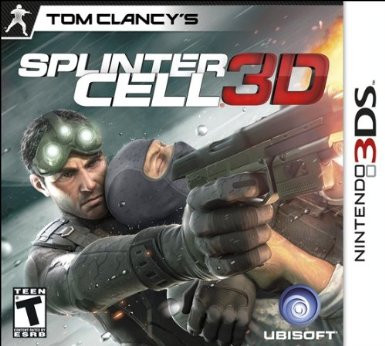 Sam Fisher is sent behind enemy lines in the Korean Peninsula to prevent WWIII, by investigating the responsible party that sunk the USS Clarence E Walsh, the United States' most advanced cruiser. Through his investigation, Sam learns that the key parties who are planning to use the Masse Kernels to launch WWIII are war comrade Douglas Shetland, Displace International, and Admiral Otomo, the Third Echelon Information Self Defense Force (I-SDF) contact. The cutting edge hardware of the new Nintendo 3DS allows Splinter Cell fans to play in immersive 3D and ability to interact with the game like nothing before.

Nintendo 3DS is a groundbreaking hardware release that brings 3D gaming to the handheld market for the first time. The fourth major release in the DS product line, the Nintendo 3DS utilizes 3D Slider functionality and an improved top LCD display to present a glasses-free 3D effect in compatible games, while giving players the option to moderate the effect as they see fit. Taken together with additional features including full analog control in 3D game environments, motion and gyro sensors that transfer the movements of the handheld into the game, 3D camera functionality, an adjustable stylus and full backwards compatibility and you have not only a must-have system, but a revolution in handheld gaming.