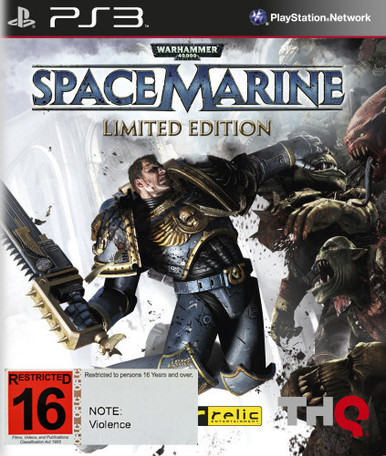 Warhamer 40,000: Space Marine is a third-person Action Shooter in which players accept the role of a Space Marine Captain tasked with the defense of the empire as well as humanity against the Chaos Faction lead by the ruthless Ork hordes. Players will have to use their exceptional size, strength, armor, weaponry and fighting spirit in order to succeed. Features include: a new seamless combat system allowing equally for ranged and melee action, hordes of deadly enemies of various kinds, intense 16-player online multiplayer and more.

In Warhammer 40,000: Space Marine you are Captain Titus of the Ultramarines, humanity's last hope for survival in a war-ridden future. Step into the armor of this superhuman warrior and use a lethal combination of deadly weapons to crush overwhelming alien forces. Fight against the savage Orks and the unholy forces of Chaos in a brutally violent world based on the richest science fiction fantasy ever created.

Space Marine features a fluid combat system that allows players to seamlessly switch from ranged to melee weapons without interrupting the flow of combat. Hitting the melee button at any time will result in a close range strike with the equipped hand-to-hand weapon as well as the camera pulling out to melee distance. Pulling either trigger will instantly snap the view back to behind the player’s shoulder ready for precise shooting. These systems are immediately responsive and leave the player in full control at all times. As the player dispatches enemies in Space Marine they will be earning "Fury" which can be used to unleash devastating ranged or melee attacks. The player can use "Fury Marksman" to enter a heightened form of awareness where time seems to slow down allowing them to pick off multiple ranged enemies in the blink of an eye. Alternately the player can opt to utilize their "Fury Strike" up close and personal with a sweeping area of affect attack that will obliterate anything close enough and knock-back and stun more distant foes.