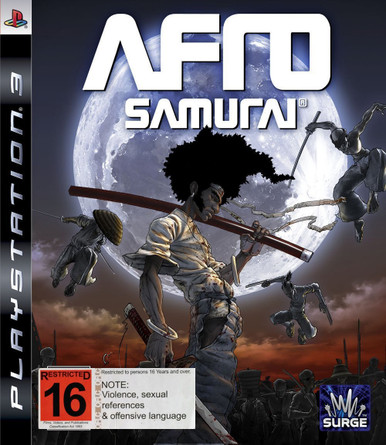 He who possesses the #1 Headband, will rule the world! Afro Samurai is the cutting edge game that delivers a new kind of cinematic game experience, a living episode that offers addictive, immersive and compelling gameplay that's literally dripping in style. Join Afro in his epic hunt for revenge to avenge the murder of his father by the current owner of the #1 Headband. Afro Samurai blends traditional Japanese culture, funky technology and hip hop to create a fresh interactive experience. The hit, animated TV series now comes to life!

The Story Unfolds
Set in a futuristic, yet feudal Japan, this story follows a samurai named Afro after his hair. Afro has set out to try and avenge his father's murder by a man named Justice. Justice murdered Afro's father to claim the 'Number One' headband, giving himself the chance to rule the world with powers akin to a god. The only one allowed to challenge Number One is the person with the 'Number  Two' headband, but unfortunately for Afro, the current owner of the headband, anybody and everybody can, and does, challenge Number Two. But never fear, as this new title includes brand new material and background for fans of the series and newcomers alike to enjoy.

Players will also need to learn the Focus manoeuvre with its bullet-time effect. This allows the user to slow down time and designate a specific strike zone, which with the right timing and skill can allow Afro to cleave an enemy in two or slice a limb completely off. And since characters are not pre-rendered you don't just get a canned scene when you cut through your enemy, giving you endless ways and means to cut your enemies down to size. This ethos is applied game-wide, as Afro is allowed to interact with anything and everything in his environment to help him on his journey.

Star-Studded Supporting Cast
Samuel L. Jackson reprises his role as both Afro and Ninja in the game, and the same striking art style