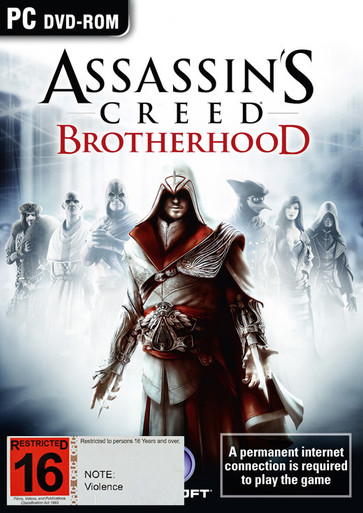 Story
Live and breathe as Ezio, a legendary Master Assassin, in his enduring struggle against the powerful Templar order. He must journey into Italy’s greatest city, Rome, center of power, greed and corruption to strike at the heart of the enemy. Defeating the corrupt tyrants entrenched there will require not only strength, but leadership, as Ezio commands an entire brotherhood of assassins who will rally to his side. Only by working together can the assassins defeat their mortal enemies and prevent the extinction of their order.

Multiple Ways to Play
Expanding on the game world woven across the first two games in the franchise, Assassin's Creed: Brotherhood provides players with multiple ways to play. In single player mode you take on an engrossing campaign playing as Ezio, the hero from Assassin's Creed II, who has now risen to the level of Master Assassin. Here players scour the expansive environment of Renaissance-era Rome, tasked with ridding the Eternal City of the continuing stain of the Templars and in the process ensuring the survival of the guild of assassins. You are not in this alone though. Additional AI members of your guild are at your command, and can be summoned to your aid if need be. In addition to this, for the first time in the Assassin's Creed franchise players can compete with other would-be assassins in multiplayer action. In multiplayer modes players choose from a range of Assassin characters, each with their own backstory, unique weapons and assassination techniques. Choose your assassin character, utilize the virtual reality capabilities of Abstergo Industries' Animus technology and match your skills against other assassins from around the world. There's no time like now to join the Brotherhood.