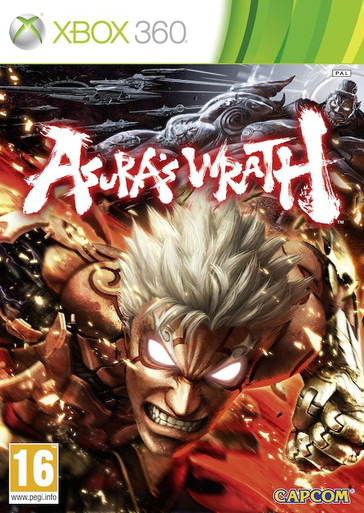 With unprecedented levels of dynamism, drama and interaction, Asura's Wrath will deliver a fresh take on the action gaming genre. Once a revered deity, Asura was betrayed by his fellow gods and stripped of all his powers. Consumed by anger at the injustice he has suffered and swearing vengeance, Asura discovers he can use this fury to his advantage and turn it against his enemies. Cue relentless action as Asura finds himself facing off against numerous unique enemies, including planetary sized bosses, unleashing devastating and visceral attacks. Asura's Wrath loses the traditional distinction between gameplay and cutscenes through seamless player controlled narrative. Simply put, even in cinematic sequences the player can control Asura, directly affecting the gameplay, making Asura's Wrath a truly unique experience.

Asura's Wrath is an Action game in which players take on the role of the demigod Asura, and take on his quest for justice and revenge against the divine powers that cast him from heaven. The game utilizes a "Beat-em Up" gameplay mechanic and an episodic narrative storyline rooted in Asian mythology and sci-fi traditions. Additional features include: a range of unique enemies, planetary sized bosses, a second playable character and a devastating attack system.

Long ago in the realm of Shinkoku, eight deities known as "The Eight Guardian Generals" battled to protect civilization from a destructive force known only as Gohma. Asura was one of the most prominent of this group. During the victory celebration, the Emperor of Shinkoku was assassinated in a sinister plot and the blame was placed on Asura. In the middle of the commotion, Asura's wife was also murdered and his daughter kidnapped. With even his brother-in-law and rival Yasha turning against him, Asura was banished from Shinkoku. Awoken by a voice after 12,000 years, Asura vows revenge on all those who have betrayed him.

With unprecedented levels of dynamism, drama and interaction, Asura's Wrath delivers a fresh take on the action gaming genre. Combining intense combat with a seamless player-controlled narrative, Asura's Wrath introduces a brand new style of action game. Players will control Asura in a blend of action and cinematic sequences taking an active role in the gameplay direction.

Asura's Wrath finds Asura facing off against numerous distinct enemies, including planetary sized bosses. Through a mix of range attacks and visceral close quarter action players will fill Asura's 'Burst Gauge,' unleashing the full force of his rage and delivering devastating attacks on those who betrayed him. Asura's story of revenge is told through episodic gameplay, taking the player on a journey of highs and lows and adopting a structure that is similar to a TV drama series.