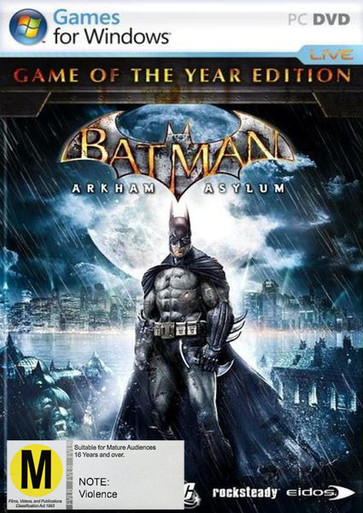 Expanding the gameplay of the original boxed edition, the Batman: Arkham Asylum Game of the Year Edition comes with all six previously released Downloadable Content Challenge Maps on disc, giving players further opportunity to hone their combat skills. Gamers can face-off against Arkham Asylum’s toughest inmates in some of the iconic environs from the game such as the infamous Crime Alley and the insane Scarecrow Nightmare.

In Batman: Arkham Asylum, Batman finds himself trapped inside the confines of Gotham’s psychiatric hospital for the criminally insane, Arkham Asylum. The Joker has set a trap for the Dark Knight and has conspired with the deranged inmates to eliminate Batman once and for all. Adding to the authenticity of the game are veteran animated Batman voice talents Mark Hamill and Kevin Conroy, who reprise their roles as The Joker and Batman respectively.

Batman: Arkham Asylum features an original story by Paul Dini, Batman writer and five-time Emmy Award winner whose credits include Lost and Batman: The Animated Series. Gamers will move in the shadows, instil fear amongst their enemies and confront The Joker and Gotham City's most notorious villains, including Harley Quinn, Bane, Killer Croc, Poison Ivy and Scarecrow, who have taken over the asylum.