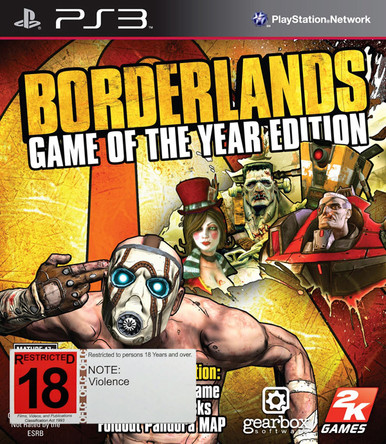 A sci-fi/action RPG from acclaimed developer Gearbox, Borderlands combines the best in first-person shooter (FPS) action gaming with elements of a traditional role-playing game (RPG). The excitement of this hybridization is further magnified by the game's groundbreaking content generation system which allows for a near-endless variety in missions, environments, enemies, weapons, item drops and character customization, making the game's single player, multiplayer and online campaigns not to be missed. This special Game of the Year edition takes the action even further with the inclusion of all four of the downloadable content releases for the game, as well as a fold-out map of all the Borderlands Pandoran territories.

In a distant future, the planets at the outer edges of the galaxy have become a beacon to fortune seekers and those yearning for a better life off world, but there are no guarantees in deep space. Pandora, one of these distant planets, was reported to be rich in untapped mineral wealth, and so drew many hoping to get rich quick, but in the end little was found beyond the scattered ruins of a past alien civilization. With nothing to gain, any who could soon abandoned Pandora, leaving those who remained to deal with the lawlessness of a world gone bust, and the mystery of the long-dead alien civilization. But as chaotic as these times were, there were worse days yet to come. After several years the planet's huge orbit slowly brought it near to its sun and once unknown and horrifying creatures sprang from their long hibernation to terrify the stranded colonists. The only hope of the colonists seems to be a vault discovered in a mountainside, rumored to contain alien technology and secrets about Pandora. Will this discovery be the colonist's salvation or their end? Discover their fate in Borderlands.

As in a traditional RPG, Borderlands is built around the continual leveling of characters as they delve into quests. These quests include both story-driven adventures and side quests that offer players rewards such as items exclusive to quest completion and/or forward movement of the story. Players can look forward to action set in both single player and multiplayer modes--including co-op play--as well as vehicular combat, literally thousands of different types of weapons that change each time you play and randomly generated maps and map features.

Borderlands features several playable characters, each with its own unique backstory, abilities and skills. Skills can be leveled up, allowing for improvement of things like health, accuracy with weapons and capacity for items. In addition to this, characters possess unique skill tree development, ensuring that each will develop differently regardless of time spend leveling them up.

Borderlands Game of the Year Edition for PlayStation 3