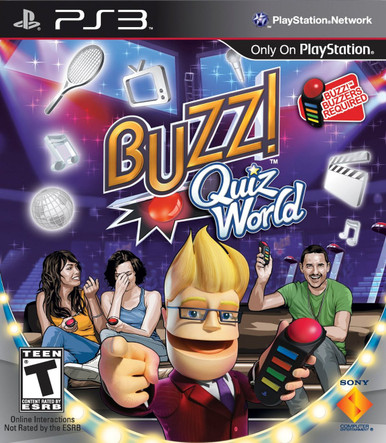 Buzz! Quiz World places players in the role of a contestant competing against others, in the over-the-top yet family-friendly, fictional game show, Buzz!, which is hosted by the equally over-the-top host, Buzz. The goal here is to accumulate as many points as possible through a series of rounds, to become the overall champion. As with earlier games in the series, each player has their own franchise specific controller/"buzzer", (not included in this game-only release), which consists of a large red button to ring in to answer questions/make selections and a variety of other color-coated buttons used for scrolling on-screen options, navigation, contestant customization, etc. One of the great features of Buzz! Quiz World is that it is designed to utilize earlier released wireless Buzz! buzzers. These take advantage of the PS3's USB connections via a dongle, each of which accommodates up to four wireless buzzers, ensuring that there is always room for another buzzer, up to the eight players that the game supports both locally and online.