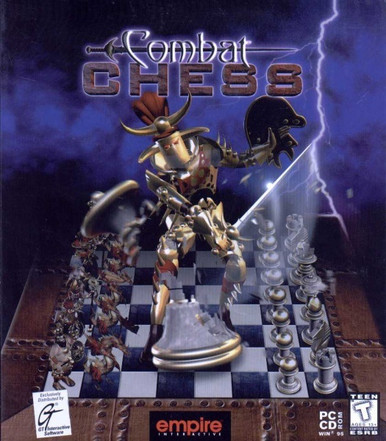 The stunning game of tournament level chess played with living, battling characters. No matter how good you are at chess, you'll have to be a whole lot better when the Black Knight's turning your Pawns to green jelly, and the Queen's threatening to deliver a majestic head-butt to your King... Suddenly, with the click of a mouse you're locked into a fight between good and evil, where losing just isn't an option. Combat Chess includes a chess engine written to Grand Master standard by a word champion chess programmer. Choose your own level, to make winning as difficult as you like and to maintain your competitive edge, you can keep an optional element of human error. The characters are brought stunningly to life by 32-bit alpha channelled graphics. And with more than 600 ingenious animation sequences, you'll never be quite sure how they're going to act. They're each armed with their own bizarre weapons- they'll even fidget when you're not paying them enough attention.

Everything you see on screen is matched by superb sound effects- including an ominous drum beat that rises to a crescendo as the time limit for your move draws near.

If you've ever wished chess could put up a bit more of a fight, Combat Chess is just what you're looking for