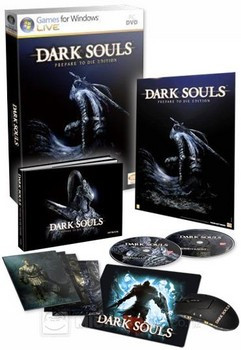 Dark Souls is the spiritual successor to Demon’s Souls. The game is well known for its considerable difficulty but highly rewarding experience. It's coming to PC for the first time this Summer.

Dark Souls: Prepare to Die Edition will include an untold chapter in the world of Lordran where the player must stop the spread of darkness at all costs by facing and defeating the Dark Knight Artorias.

Beware: There is no place in Dark Souls that is truly safe. With days of game play and an even more punishing difficulty level, Dark Souls will be the most deeply challenging game you play. Can you live through a million deaths and earn your legacy?

This edition will include an online match-making feature for co-op or player vs. player gameplay, allowing gamers to showcase their skills against other Dark Souls players around the world.

Dark Souls’ dungeon crawling, dragon brawling, tension-filled action features fearsome enemy encounters in an complex world full of extreme battles, rewarding challenges, nuanced weaponry and powerful magic, while offering players the flexibility to customize each character to suit any desired play style. The innovative online component allows gamers to draw from the collective experience of the Dark Souls community as they either help or sabotage each other on the journey through the world of Lordran to save the land from darkness. With a massive, open world design, Dark Souls encourages deep exploration and an adaptable gameplay experience.

Dark Souls™: Prepare to Die™ Edition will include an untold chapter in the world of Lordran. Sent back to the past, player will discover the story when Knight Artorias still lives.