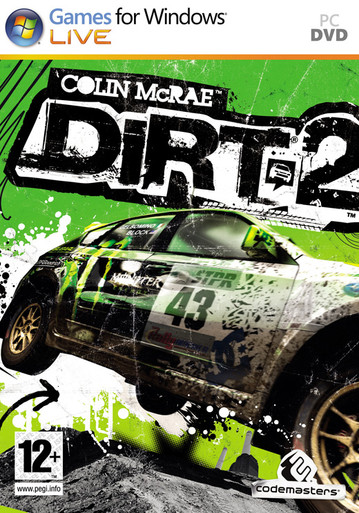 As the sequel to the acclaimed racer of 2007, DiRT 2 is set to take off-road racing games to a new level. Packed with a wide variety of features and in-game events such as new benchmark technology, thrilling new race types, big event atmosphere, stunning locations, a new breed of off-roading heroes and a peerless line-up of super-charged speed machines, DiRT 2 isn't your standard off-road racing game. It is the new standard.

Promising a thrilling race experience and an extreme sports attitude that borrows from snowboarding and skateboarding culture, DiRT 2 will take players on a World Tour to diverse and challenging real-world environments to compete in contemporary off-road events. Specifically selected to deliver aggressive and fast paced racing, DiRT 2’s garage will house a best-in-class collection of officially licensed rally cars and off-road vehicles; covering seven vehicle classes and players will be given the keys to powerful machines right from the off.

In addition, DiRT 2 come complete with full online functionality that will be core to the overall experience, with head-to-head competitive online play and new social features to engage the racing community. Prepare for mud, gravel, dust and dirt too in DiRT 2.

Turbo-charged Off-roading with Extreme Sports Attitude
Defined by its multiple disciplines, encompassing the very best that modern off-roading has to offer and fuelled by the 3rd generation of Codemasters’ world-renowned EGO Engine technology, DiRT 2 has more attitude, more adrenaline and more DiRT than ever – off-roading just got cool.

Take it on Tour
DiRT 2 will take players on a World Tour to compete in aggressive multi-car and intense solo race events in the most diverse and challenging real-world environments. Career paths will span the globe as players unlock tours in stunning locations spread across the face of the planet. Races within the USA, Japan, Malaysia, Baja, Croatia and others await as players climb to the pinnacle of modern competitive off-roading.

Love Your Ride
Embark on a game-long love affair with your favourite cars. Rather than being forced through a checklist of in-game cars, DiRT 2 enables players to pick their favourite rides and drive them across multiple disciplines. Upgrade them, cherish them - and then smash them to bits at breakneck speeds. Get to know which to use for what event and surface, tweak them to perfection, then push them to the absolute limit.

The Complete Off-road Online Package
DiRT 2 invites players to become part of an extreme sports community, with full online multiplayer race events and community integration across multiple disciplines. With leader boards, news feeds and ‘scribbles’ to keep you up-to-date on your friends’ racing achievements, DiRT 2 will be a social hub for off-roading fans.