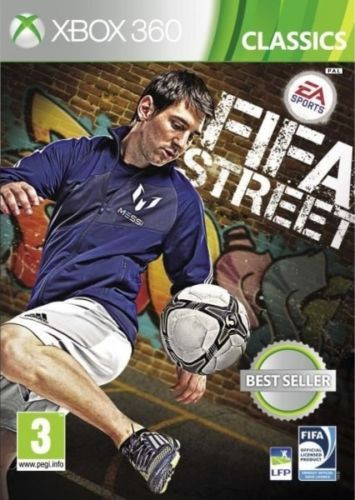 FIFA Street is the most authentic street football game ever made. Enjoy a unique and fun experience where everything from the environments to the gear to the music is true to the sport and its culture.

Whether performing one panna after another without breaking a sweat the way the game is played in Amsterdam, or a physical, fight-for-possession style the way players compete in London, fans will enjoy a superior fidelity of ball control and responsiveness than anything ever experienced. Plus, for the first time ever, utilize aerial skills to maneuver past opponents, an all-new sophisticated wall-play mechanic and over 50 brand new spectacular skill moves.

Complete Customization - Enjoy customizable matches to replicate the unique ways the game is played around the world. Choose from different size pitches, number of players, and match types. Take on the challenge of performing trick moves and panna's in a game in Amsterdam, authentic futsal styled matches with no wall play in Spain, or a physical 5v5 contest with assigned player positions in the UK. EA SPORTS Football Club - FIFA Street will be connected to EA SPORTS Football Club, so from the first nutmeg on, you will be contributing to your Football Club identity.