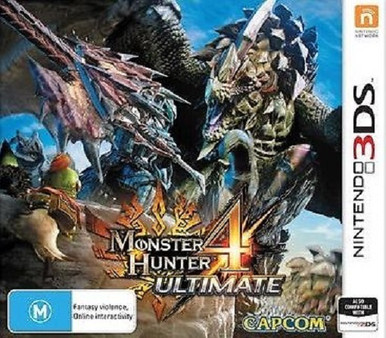 Monster Hunter 4 Ultimate will take players to new heights, literally, with the introduction of more vertical and lateral movement than ever. An expanded repertoire of actions will create more dynamic hunting experiences with fluid climbing motions and the ability to jump attack from walls or ledges.

In addition, players will be able to ride atop a monster for a limited time as they hang on and deliver attacks. With the addition of two new weapon classes, challenging new monsters and numerous locales, Monster Hunter 4 Ultimate will be the most robust hunting experience yet.

Online Play - Connect with up to three other hunters online over the Nintendo Network for the first time ever, or local wireless, to join up and take down larger than life beasts.

Two new weapon classes - The Insect Glaive is a long staff type weapon accompanied by a powerful flying insect which can be customized with various attributes; the Charge Blade is a hybrid that switches between a sword and shield or axe mode.

More vertical environments - The action expands with more fluid climbing motions and the addition of jump attacks from walls or ledges.

New gameplay mechanic - For the first time ever, hop on to monsters and hold on to deliver a burst of attacks. Returning favourites and fresh challenges - Brand new monsters such as the dark and menacing Gore Magala as well as hordes of returning favourites including the primal Tigrex, players have access to the largest roster of ferocious enemies than ever before.