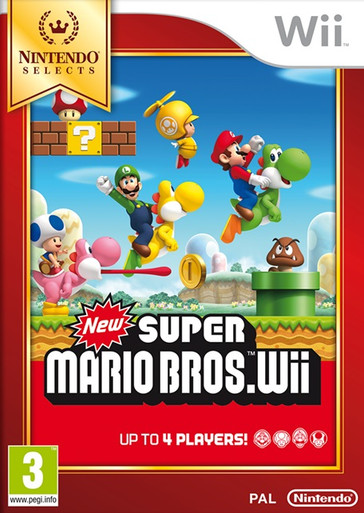 New Super Mario Bros. Wii combines classic platform gaming and the power of Wii to create a brand new experience that’s fun to play alone or with friends and family.

Lead Mario through worlds of adventure using the Wii Remote, and opt to save Princess Peach all by yourself or with a little help from your friends. New Super Mario Bros. Wii enables up to four players to get in on the action at the same time – creating chaos as you either work as a team or attempt to get ahead by being the first to hitch a ride on Yoshi, grab precious Power-Ups and generally look our for number one!

Long after the original Super Mario Bros. set the standard for 2D platform games, New Super Mario Bros. Wii returns to the roots of the series by inviting players to explore colourful worlds fraught with tough challenges and amazing discoveries. Contend with Bowser and his minions as you grab amazing new Power-Ups that enable Mario to slide and glide to victory, and return to familiar territory by hitching a ride on Yoshi and searching out the game’s many secrets.

The challenges come thick and fast in New Super Mario Bros. Wii, with multiple game modes ensuring there’s always a fresh challenge in store. Work your way to saving Princess Peach in Story Mode, pick and choose the courses you want to enjoy in Free Mode or enjoy some old-school Mario competition in Coin Battle. Whatever way you play, up to four players can always share in the fun!