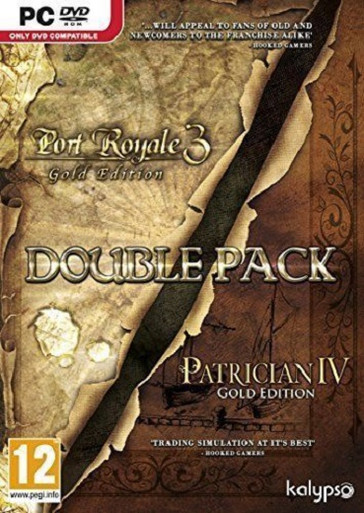 Port Royale 3 Gold Edition contains the full version of the multiple award-winning strategy game as well as the official expansion pack, Treasure Island. Players will embark on an epic adventure through the Caribbean during the turbulent 17th Century where the naval powers of Spain, England, France and the Netherlands fight for supremacy in the colonies. Take on the role of a young captain trying to build his fortune and reputation in the new world colonies where three expansive campaigns offer three different paths for the young protagonist to follow: adventurer, trader and pirate.

In Patrician IV Gold Edition the player takes on the role of a young merchant in the area of the Baltic and North Sea during the late Middle Age, the zenith of the Hanseatic League and its naval trading empire.

Starting from meagre beginnings as a small stall trader, players must use every skill at their disposal to rise through the merchant ranks and become the most powerful merchant in Europe. The authentic supply and demand-based trading system allows players to grow their business and head out to the high seas to form trading routes with other Hanseatic cities negotiating better prices for the buying and selling of goods.