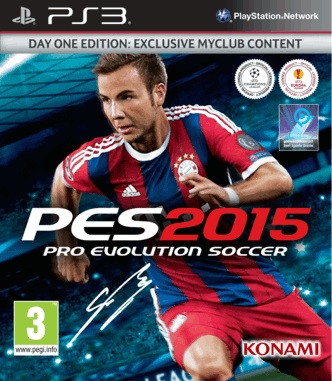 Through the combined efforts of the Tokyo and Windsor-based PES Productions team, the heart-thumping and nail-biting moments of top-flight football have been perfectly recreated. PES 2015 sees a true return to core PES values of total control, super responsive controls and renowned gameplay, where the user has unrestricted control over how they play. KONAMI has completely reworked a raft of key elements to ensure every pass, shot or off-the-ball run is finely balanced to give maximum player satisfaction within PES 2015’s on-field action. A new shooting system allows a variety of unrestricted shooting styles with precise control over the direction and power of all strikes. Countering enhanced attacking options, goal keepers intuitively close angles and are capable of an incredible number of ways to react to any situation, including altering centre of gravity. Likewise, passing options available to players when delivering a final pass have been expanded, allowing for little knock-ons or searing low passes that use new physics routines to ensure the ball behaves realistically across every situation, providing unique and differing outcomes decided by user actions. The final key element that has been totally reworked centres around the degree of close control on offer. Positioning is vital, but the ability to dribble into space and beat your marker is now hugely improved and opens up PES 2015 as the definitive on-field experience

PES 2015 now boasts a huge array of players that both look and play like their real-life counterparts. KONAMI has faithfully recreated over 1000 players this year, with bespoke animations and playing styles across its extensive player roster. They run like they should, play the way they do in real life, and react emotionally as they would to fouls, goals or referee decisions – with their frame of mind actually affecting how they play! The individuality of the players is further enhanced with seamless animations. No sacrifice to animation has been made in the pursuit of fast response, yet the movements flow effortlessly calculated in real-time and dependent on the player’s position in relation to the ball and its speed. PES 2015 mirrors the atmosphere of a top-flight match. The crowd animations have been hugely enhanced, and the ebb and flow of a match is met with context-sensitive crowd effects and movements. Real-time lighting is used across the entire stadium, with the enhanced visuals bathed in the changing light of a changeable day or the stark glare of the floodlights at a night match.