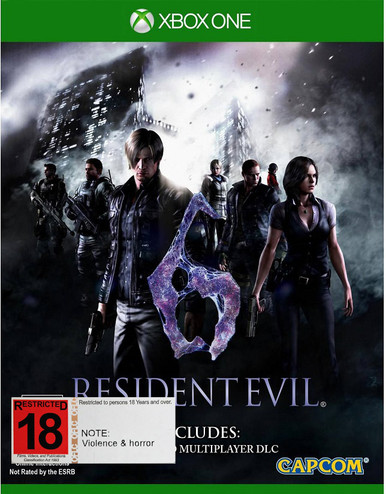 Includes all Map and Multiplayer DLC

Resident Evil 6 is a Survival-Horror game that continues the struggle against the series' signature zombie inducing bio-terror, while raising the bar with all new game functionality.

Players enjoy a diverse play experience, highlighted by the ability to select between three scenarios featuring multiple characters and intertwined storylines. Within these scenarios both stories and action cross paths. Additional features include zombies as well as new enemies, upgradable firepower and characters, vehicle based options, the mini-game based Mercenaries mode, and single-player and co-op play options.

The Most Ambitious, Immersive and Feature Rich Resident Evil To-date

Blending action and survival horror, Resident Evil 6 promises to be the dramatic horror experience of 2012. Resident Evil favorites Leon S. Kennedy and Chris Redfield are joined by new characters, including Jake Muller, to face a new horror, the highly virulent C-virus, as the narrative moves between North America, the war-torn Eastern European state of Edonia and the Chinese city of Lanshiang. Joining this cast will be presidential aide Derek Simmons, who vows to track down Leon for his involvement in the President's death, and femme fatale Ada Wong. But what part will Ada play as the story unravels and does she have ties to the mysterious Neo-Umbrella?

With three distinct, yet interwoven story threads, each with their own pair of protagonists for either solo or co-op play, both offline and online, not only will Resident Evil 6 deliver both different perspectives and gameplay styles but, with the introduction of the innovative Crossover gameplay mechanic players will be able to team up and share the horror. At key moments during the game, up to four players can join together online to tackle a specific situation, with some stages seeing the usual partnerships swapped to further increase the depth of gameplay.

It has been ten years since the Raccoon City incident and the President of the United States has decided to reveal the truth behind what took place in the belief that it will curb the current resurgence in bioterrorist activity. Due to be by the President’s side is his personal friend and Raccoon City survivor, Leon S. Kennedy, but when the venue suffers a bioterrorist attack, Leon is forced to face a President transformed beyond recognition and make his hardest ever decision. At the same time, Bioterrorism Security Assessment Alliance member, Chris Redfield arrives in China, itself under threat of a bioterrorist attack. With no country safe from these attacks and the ensuing outbreaks, the entire world’s population is united by a common fear that there is no hope left.

In a first for the franchise, Resident Evil 6 sees series favourites Leon and Chris come together to face this unprecedented threat. They will be joined by new characters, each with their own unique perspective and involvement in this relentless dramatic horror experience enacted on a global scale.

Redesigned control system:
Resident Evil 6 features an evolved control system allowing players to shoot whilst moving, slide, roll in any direction and take cover along with the addition of an enhanced melee attack