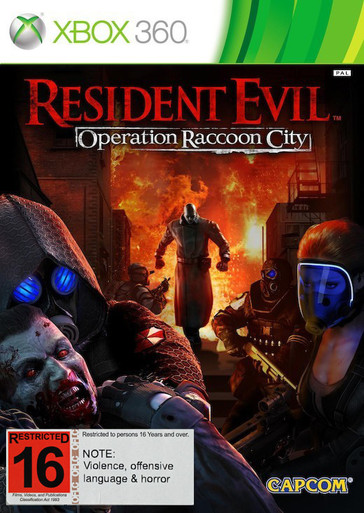 Resident Evil: Operation Raccoon City is a hybrid Horror-Survival/squad-based Third-person shooter game set between the events of Resident Evil 2 and Resident Evil 3: Nemesis. The game features mission-based gameplay as multiple playable characters from the Umbrella Security Service, each with special abilities. Additional features include: a wide array of enemies (zombie, human and other), four-player support in the campaign, and the ability to play as iconic Resident Evil characters in an online mode.

It is September 1998 and the action centers on the ill-fated Raccoon City. When the Umbrella Corporation learns that one of its top scientists, Dr. William Birkin, plans to sell the experimental G-Virus to the US Government they order an elite team of Umbrella Security Service (U.S.S.) soldiers led by Hunk into their secret research facility to secure the only known sample of the virus. The operation takes a turn for the worse when Dr. Birkin injects himself with the last vial, mutating into a deadly creature, G-Birkin and over powering the team. During the battle the deadly T-Virus is leaked into the sewers and spread through Raccoon City, infecting the entire population.

Hearing of the outbreak, the U.S.S. team is given fresh orders to destroy all evidence of Umbrella's involvement and silence anyone that might discover the truth. The Umbrella Biohazard Countermeasure Service (U.B.C.S.) are also deployed to help contain the situation. Meanwhile the US Government has quarantined the city and dispatched its own team of special operatives to determine the source of the mysterious outbreak. Caught up in the chaos are rookie police officer Leon S. Kennedy and Claire Redfield.

Resident Evil: Operation Raccoon City blends classic Horror-Survival gameplay with third-person team-based Shooter action. Players take on the role of an Umbrella Security Soldier (U.S.S.) and battle against all the competing forces at play in Raccoon City. Choose from six characters, each one equipped with a unique skill set, including the female field scientist Four-Eyes who can manipulate the T-Virus and take control of the B.O.W.'s raiding the streets of Raccoon City or the weapons expert and U.S.S. Team captain Lupo. The game also offers four-player co-op play, and the online Heroes Mode which allows for play as classic Resident Evil characters, such as Leon Kennedy, Claire Redfield, HUNK, Jill Valentine and others.