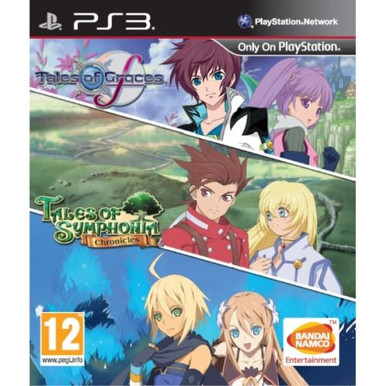 Compilation featuring both Tales of Graces F and Tales of Symphonia Chronicles.

Tales Of Graces f is the latest episode in the renowned Tales series on the current generation of consoles, and the first European appearance of the franchise on PlayStation 3. The story is set against the backdrop of three countries beset by a turbulent conflict and is founded on the ideals of "defending your convictions" and "protecting the people important to you.

For the first time in the Tales series, the combat system lets the player freely change attack style depending on the battle situation. The characters' distinctive weapons can be swapped for different styles, and the new combat system is easier to control while simultaneously making battles more involving. The title is developed by Namco Tales Studio Ltd. in Japan with the aim of bringing to life the rich depth of the evocative characters created by Mutsumi Inomata.

In the world of Ephinea, a civilization flourishes through the use of "Eleth," a substance found in a material called "Crius." Three kingdoms - Windor, Strata and Fendel - struggle for dominance of the world, while in the remote Windor town of Lhant, the eldest son of Baron Aston, 18 year old Asbel, strives to become a fully-fledged knight. However, Asbel is forced to give up his dream when his father passes away and he is obliged to succeed him as the Baron of Lhant.

Tales of Symphonia follows the journey of two young heroes, Emil and Marta in a world of chaos as their fates intertwine with Lloyd, Colette, and Ratatosk, a summon spirit rumoured to be the lord of all monsters

In the world of Sylvarant the land is dying due to a steady loss of Mana, the energy source that is needed for both magic and life itself. As crops begin to wither and hardship sets in, the people turn their hopes to the Chosen, who can reverse the ills of the world by completing the Journey of World Regeneration.

Lloyd Irving and his friends must find a way to help the Chosen awake the Summon Spirits, but they'll soon discover the fate of a second world is tightly linked to their actions...