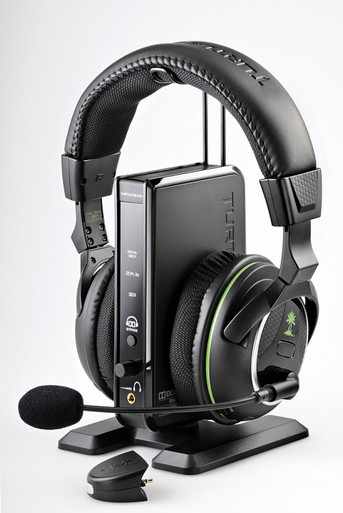 The Turtle Beach XP500 is a special version of the critically-acclaimed PX5 that’s designed specifically for the XBOX 360 and includes an XBA Bluetooth adapter for wireless XBOX Live chat. Just like the PX5, the XP500 delivers the ultimate gaming audio experience with a programmable digital signal processor, Dolby® Surround Sound, Bluetooth technology, and XBOX LIVE wireless chat, making it the most technologically advanced headset ever designed for the XBOX 360. The DSP allows gamers to enhance and personalize the entire gaming audio experience with fully customizable game, chat and mic signals. Custom presets stored in the Turtle Beach XP500 headset can be selected during specific parts of the game to emphasize sounds like footsteps or reloads that might otherwise be difficult to hear. It can even be programmed to disguise your voice or to enhance the voices of online players so you can hear them more clearly during intense parts of the game. Bluetooth technology lets you chat wirelessly on XBOX LIVE and PSN, answer mobile phone calls and stream music – all while gaming in immersive 360 degree surround sound. Although optimized for Xbox 360 gaming, the Turtle Beach XP500 is also perfect for watching movies and listening to music, with its impeccable audio performance, large, deep, fabric cushions, soft headband, and twist cup designed for resting the headset on your shoulders. The Turtle Beach XP500 continues the evolution of a new breed of wireless gaming headset that serves as the ultimate “secret weapon” in the arsenal of serious gamers seeking unmatched audio quality, sonic control and a competitive advantage.