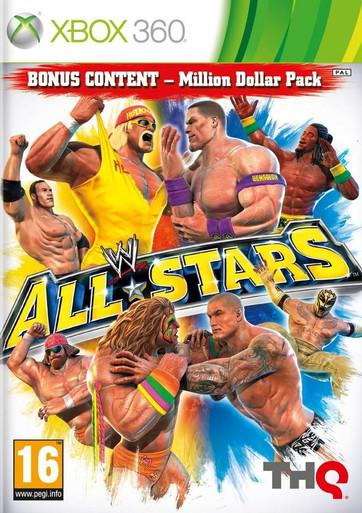 INCOMPARABLE ROSTER – Delivering one of the greatest rosters ever assembled in a WWE videogame, WWE All Stars will include WWE Legends and WWE Superstars such as John Cena, The Rock, Andre the Giant, Big Show, Triple H, Bret Hart, Ricky “The Dragon” Steamboat, Rey Mysterio and for the first time ever in a THQ/WWE videogame, “Macho Man” Randy Savage. Each WWE Legend and WWE Superstar will boast a distinctive and highly stylized appearance, adding to the overall atmosphere and intrepid attitude exuding from the on-screen action.

ORIGINAL GAMEPLAY STYLE – Bridging generations of WWE enthusiasts and casual followers alike with a fun, intuitive and approachable gameplay style, WWE All Stars will create a highly competitive environment and an engaging spectacle. Packed with high-flying and hard hitting action, players will explore a variety of responsive quick and strong grapples, standing and running attacks, as well as combination sequences. Every WWE Legend and WWE Superstar will be equipped with individual abilities, signature moves and renowned finishers to create the ultimate experience.

DISTINCT CHARACTER CLASSES – Offering four classes of competitor – Acrobat, Big Man, Brawler and Grappler - WWE All Stars will provide players with WWE Legends and WWE Superstars who have distinct advantages and techniques to which other classes do not have access, including specific combinations and unique abilities.

FANTASY WARFARE – Setting up the notion that the greatest matchups in WWE history may not have happened yet, Fantasy Warfare will see players pick a side – WWE Legends or WWE Superstars – and compete in a series of fantasy matches that pit WWE talent with similar personal or physical attributes against one another to see who is the greatest of all time. Informative and engaging video packages will set up each of the pairings and match objectives.