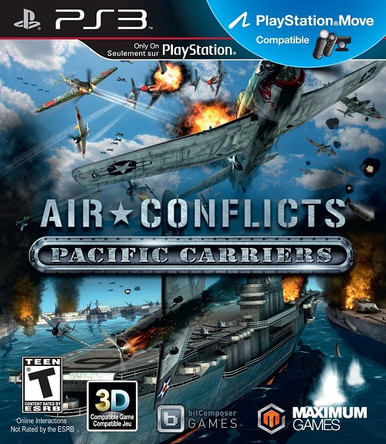 Test your valor in breathtaking missions across the sea!

Air Conflicts: Pacific Carriers is an arcade flight simulation game set in the Pacific theater during World War II, featuring the aircraft and ships of the period, and historically inspired missions. The emphasis is on intense dogfights, daring bombing raids, torpedo runs and exciting aerial missions.

Air Conflicts: Pacific Carriers is a unique flight simulation with strategy elements and a compelling storyline. As Lucas Stark, Admiral in the US NAVY in charge of the USS Enterprise (CV 6), you control aircraft missions that take place over the Pacific Ocean during WWII. On the other hand, should you choose the side of the Japanese, you will embody Hideaki Hashimoto and take charge of the carrier known as Zuikaku, representing the Imperial Japanese Navy in a fight till the death. Much more than your average flight simulation, Air Conflicts: Pacific Carriers combines true events with arcade gameplay that allows you to take control of entire squadrons. It puts you in charge of not just one airplane but every aircraft and weapon on your team. Protect your carrier by taking control of the ship's cannon turrets in Survival Mode.