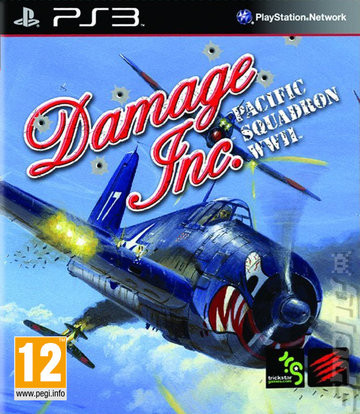 Rule the Air, Win the Day!

Take to the skies in one of over 30 accurately represented aircraft and defend the Pacific Theatre from invading enemy forces. Fight your way through intense air-to-air, air-to-ship, and air-to-ground combat while piloting dive bombers, fighters, and torpedo bombers over visually striking, historically accurate locations.

From the surprise attack on Pearl Harbor to the fierce Battle of Iwo Jima, outmaneuver your foes through more than 20 multi-objective single-player and co-op missions, or engage in head-to-head dogfights on the PlayStation Network. Whether flying alone, alongside, or against your teammates, use your aerial arsenal to devastate the enemy and dominate the air.

More than 30 incredibly detailed, historically accurate airplanes - - including rare and never before flown WWII prototypes - - provide an authentic flight combat gaming experience. With handling characteristics, weapons suites and armor strength each replicated from the real planes, you get to sit in the pilot seat and enjoy all of the action first-hand. From the indomitable Hellcat to the feared Zero, a full hangar of Allied and enemy planes is at your disposal.

Pit your flight combat skills against online foes in multiplayer dogfights featuring support for up to eight concurrent players on the PlayStation Network. Multiple game modes deliver endless replay value while adding to the excitement of participating in the greatest aerial battles of the Pacific Theatre.

In this classic deathmatch mode players test their abilities against up to seven other competitors. Tasking each individual flying skill, players must survive with wits alone by choosing the right time and position from which to strike. With a host of modifiers, you can customize your games to create a level of challenge that matches your skill level.

Split into teams to see who can win this battle in the skies.

All players begin with a set number of lives and then fight until only one remains. Players need the all-round skills to be the last man standing over a number of rounds.

Teams of players work together to eliminate the other team. All players begin with a set number of lives, and the last team with lives remaining is the victor.

Two teams battle to sink each other’s aircraft carriers in this epic aerial battle. Use dive bombers and torpedo bombers to attack the enemy’s carrier with cover and support from your fighter wing.

Join Forces with Online Teammates and Conquer Campaign Missions Together

Up to four players can team up to tackle the campaign missions together. If all players are at the same point in their campaign progress, new missions and planes become available in this mode.

Perfect for pick-up-and-play gaming, Arcade mode simplifies the control scheme and gets inexperienced players right into the action. Once you master the basics, switch over to Sim mode to gain more precise control over each aircraft.

Not limited to in-air combat, certain missions in Damage Inc. Pacific Squadron WWII accurately replicate one of the most challenging aspects of aerial warfare - - landing on the aircraft carrier from which you launched. Just as you would when preparing for a real battle, take control of your plane and get it airborne. After obliterating the enemy, guide your aircraft back to the flight deck to complete a successful mission.

Compatible with Flight Stick Controllers, Including the Pacific AV8R FlightStick

Styled after WWII combat aircraft and custom-crafted to perform with Damage Inc. Pacific Squadron WWII, the Pacific AV8R FlightStick imparts the sensation of true flight. With a soft-touch rubber finish for extreme comfort during extended missions and a grip similar to those found in historic military planes, the precise control required to conquer the enemy and rule the skies is in your hands.