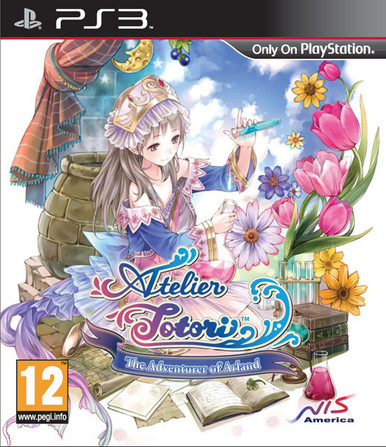 Atelier Totori: The Adventurer of Arland is a single player turn-based Japanese Role-playing game (JRPG) exclusive to the PlayStation 3 console. The 2011 release in the long-running PlayStation based Atelier franchise and sequel to the earlier Atelier Rorona: Alchemist of Arland, this game focuses action on a combination of alchemist based item creation, party combat utilizing AI companions, character leveling and exploration gameplay. Additional features include: classic turn-based RPG combat and strategy, in-game characters that can be hired to search for needed items, AI character assist abilities, character specific finishing moves, frequently updated quests and a variety of possible game endings.

The small fishing village of Alanya on the Arland Republic's southern border is home to the young alchemist-in-training Totooria Helmold. She is called Totori by her friends and family, and she wishes to become a great adventurer. One day, she resolves to make the journey to Arland, become an adventurer and explore the world beyond her hometown. She will make many friends along her journey of discovery - some new, some familiar. When her quest comes to a close, your actions over the course of the game will dictate whether she finds the answers to her questions, forges unbreakable bonds with friends, or takes a different path entirely.

As with previous games in the Atelier series, Atelier Totori: The Adventurer of Arland is a turn-based RPG with gameplay and combat rooted in alchemy and exploration. Events take place years after the previous game, continuing five-years into the future of the new heroine, Totori as she follows in the footsteps of her famous adventurer mother. To find out more about Totori's mother you become an adventurer in training yourself and explore the gameworld. Adventurers are a recognized profession in this world and one that is regulated via an Adventurer's License that contains various ranks. The rank of your license is built up by accumulating points, which in turn allow for greater access to areas of the gameworld. Points are gathered in a number of ways, including: maping out available lands, helping citizens, discovering and synthesizing new items that are found, discovering special landmarks and defeating monsters and bosses in combat.

Item synthesis involves obtaining recipes and then gathering objects that can be combined into entirely new items usable in-game. This deep system allows you to adjust secondary effects like the quality and traits of new items. In-game characters called Homunculi can be hired to automatically gather items you wish for synthesis, freeing Totori up to do other things. The efficiency of Homunculi can be increased by providing them with pies, which they relish. Battles are turn-based, initiated by random encounters with enemies. Totori can hire up to two party members from characters that she encounters throughout the gameworld, and she can change members at will. Party members can help when Totori is attacked via the game's Assist System, each in a specific way. These characters can also assist in attacks that Tori initiates. Dealing damage to enemies or using the Assist System can raise your character's Super Move gauges. Once filled, characters will gain access to their Super Move, which can be used to deal maximum damage.