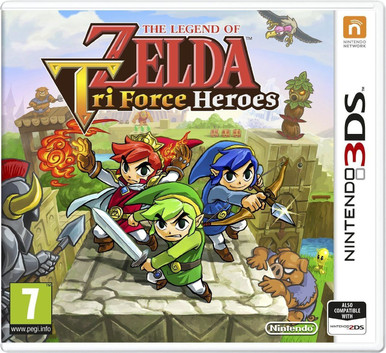 In the visual style of the critically-acclaimed “The Legend of Zelda: A Link Between Worlds” game comes a new adventure. In this journey, three players team up to cooperatively make their way through inventive dungeons and battle bosses.

Use the new Totem mechanic to stack three Links on top of each other to reach higher grounds and solve puzzles. Collect loot to create wearable outfits, each with a different boost or ability.

Features: Similar visual style and top-down view of The Legend of Zelda: A Link Between Worlds. As Link, buddy up with two other Link characters and cooperatively solve inventive puzzles to progress through the game.

All three players share hearts, so they must work together to defeat enemies and solve puzzles. Stack three Links on top of each other with the new “Totem” mechanic, which makes it possible to reach new locations to solve puzzles. Collect loot to create wearable outfits, each with a different boost or ability.

Each dungeon is structured with four main areas. Single-player mode allows the player to rent two paper dolls to take along to complete the team of three and face challenges in dungeons. Choose from a set of emoticons to communicate with each other while playing in multiplayer mode. Team up with two other players in multiplayer mode via local wireless connection, online and with download play.